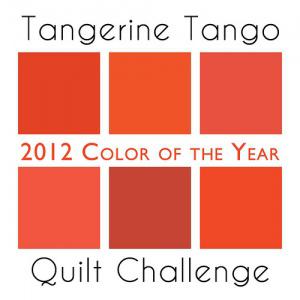 A little late with this, but it can serve as a final salute to 2012's Pantone Colour of the Year, Tangerine Tango.  A quilt challenge, to feature tangerine in either a mini or larger sized quilt was announced in January, 2012, and the entries were posted to a Flickr group.

The winners were duly announced and can be viewed on the a.squared.w blog.

If you like tangerine, or orange in all its shades, this is a good way to see out 2012 on a quilting note.

(And if you are not so keen on tangerine, but love hexagon, check out Ali's Festival of Hexagons from the northern summer)
Posted by Blog editor at 11:28 AM