This week at Fairholme ...

It seems there were many Fairholme quilters at the Sydney Quilt Show for at least one day, some for more. Everyone enjoyed the show, and quite a bit of shopping might have been done, but no-one was showing off their purchases - we'll eventually see them in quilts.

Thanks for a good show QuiltNSW - see you next year back at Darling Harbour.

Posted by Blog editor at 4:20 PM No comments: 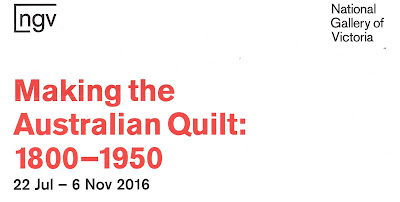 Making the Australian Quilt: 1800–1950 is the first major exhibition of its kind to bring together the rich works that constitute Australia’s quilt heritage. Exclusive to Melbourne, the exhibition includes more than eighty works from around the country.

Key works such as The Rajah Quilt and examples by renowned makers Mary Jane Hannaford, Marianne Gibson and Amelia Brown are shown alongside a number of recently discovered pieces not exhibited before. They include quilts, coverlets, garments and quilted, patched and pieced works made in Australia or with a significant Australian provenance.

The exhibition also features key 19th century English quilts that were brought or sent to Australia, informing and influencing the early quilting practices of local makers.

Tickets are on sale now, from the National Gallery of Victoria
Programmes and events associated with the exhibition
Posted by Blog editor at 8:30 AM No comments:

The two Viewers' Choice Awards from the Sydney Quilt Show have been announced, and photos are on the QuiltNSW blog, Template Free now.

View all the prize winning quilts in the Sydney Quilt Show 2016 Online Gallery.
Posted by Blog editor at 2:17 PM No comments:

Yes, this week is all about the 2016 Sydney Quilt Show. Some of our members have quilts hanging in the show, as is our 2016 raffle quilt, Rousillon which is having its last outing before being handed over to the raffle winner. Miriam kindly took photos for us, and she has posted a blog of her favourite quilts.

Award winner Linda Steele has posted some of the 200 photos she took during her Wednesday visit to the Show, on her blog, here - well worth a look.

Sydney Exhibition centre at Glebe Island has posted an album of 37 photos from the Show on its Facebook page, here.

You can also follow Quilt NSW via Instagram: @quiltnsw and the #sydneyquiltshow2016 and on Facebook where you will find many photos.
Posted by Blog editor at 6:03 PM No comments:

If you would like to see more of Rachel's quilts, her blog is Blue Mountain Daisy.
Posted by Blog editor at 3:25 PM No comments:

Need some lovely quilts to look at this damp weekend? Feast your eyes on the 2016 National Juried Show winners at Quilt Canada Toronto, 2016. 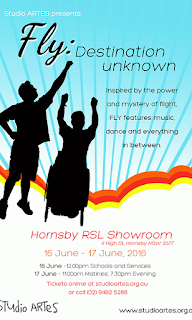 Studio ARTES
Visitors to our show will recall that Studio ARTES, who we supported with our show raffle, and who were our guest exhibitors, are recovering from the losses suffered in a studio fire in April. They are doing well, having moved into temporary studio space, and getting  on with the various activities offered to people with disabilities.

This week the performance group is presenting Fly: Destination Unknown on Friday 17th in Hornsby - tickets are still available here, or at the door.

Studio artists Thom and Angelmouse (Robert Smith and Harriet Body) are currently exhibited at Hazelhurst Gallery in Gymea, as part of Wonder, an innovative exhibition for children, families and the young at heart, until 7 August. This is the gallery where the quilt exhibition Labours of Love was held last September.

Aussie Hero Quilts
You might be aware that Jan Maree Ball, the founder of Aussie Hero Quilts and Laundry Bags lost her home to a fire recently. An online fundraising campaign has been established to help keep the program going, and support Jan and her family.
Posted by Blog editor at 3:55 PM No comments:

Some recent show and tell ...

We didn't meet yesterday because of the long weekend, but that might have meant there was more sewing done. Here are some finishes and an experiment from last week:

Quiltsmith has announced its fabric sale to run from today (11 June) until 2 July - very convenient for Sydney Quilt Show visitors since 75 Nelson Street Annandale is just a few minutes drive from Glebe Island. The sale is in-store only. 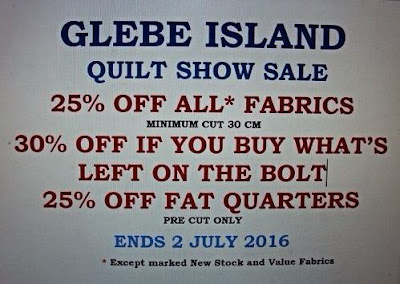 Revisiting a popular technique ... and some new things

At a recent meeting, we revisited the disappearing nine patch - a clever way of making a quick quilt block that looks much more complicated than it actually is, after a few members mentioned that they wanted to make it, but had not seen it done (it hit the internet about 2008, with quite a flourish, although the technique is older, and Janet Wickell says the term was in use by 2002).

Julie brought in two quilts she made using the disappearing nine patch technique, but using different block layouts to achieve quite different overall designs from the 'standard' one. There are many other ways of placing the blocks to achieve different effects (just Google 'disappearing nine patch' images, and settle in for some net surfing). You can also see how using border fabrics of differing values changes the look of the quilts. Thank you for sharing your beautiful quilts, Julie. 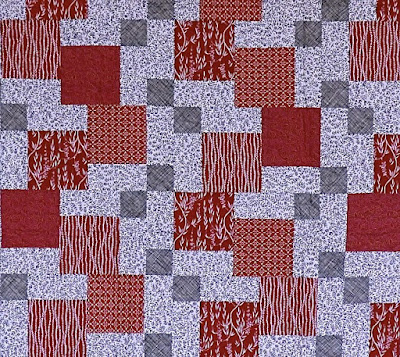 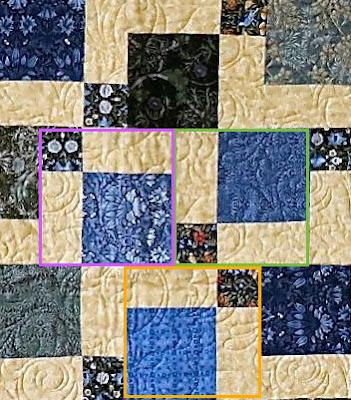 Quiltsmith, one of our favourite quilt shops (in Annandale), has launched its new, improved website, and it is fabulous.

Fabrics and other products available online are arranged into a series of online 'shops', with additional tabs for classes, events, newsletters and administrative functions. It is very attractive, and easy to navigate. The regular class lists are very clear and detailed. One-off workshops are listed under 'events'. 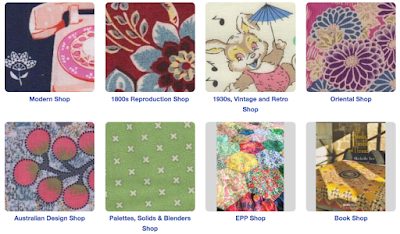 Images from the Fairholme Quilt Show (7)

This week at Fairholme ...

This short video demonstrates am very nifty method for burying thread ends, including quite short ones:

Images from the Fairholme Quilt Show (6)

Posted by Blog editor at 3:48 PM No comments: