When too many quilt shows are never enough ...

This lovely south coast town is always worth a visit.  Details from the Quilters Guild of NSW here.

Photo: http://about.nsw.gov.au
Posted by Blog editor at 5:59 PM No comments: 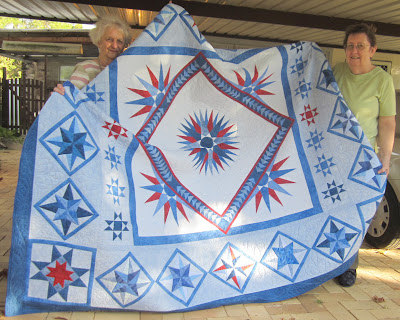 Coral Shand wasn't present when her ticket was drawn as the first prize winner in our Quilt Show raffle on Sunday afternoon.  But she was delighted when Robin delivered it to her on Tuesday, especially since it was her birthday on Wednesday.

Congratulations, enjoy your quilt, and thanks for supporting our fund-raising.
Posted by Blog editor at 5:39 PM No comments: 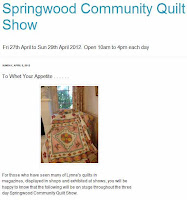 Springwood Quilters kindly keep a blog devoted to preparations for their annual show - you can see the two gorgeous raffle quilts in the making (and finished), as well as news about the featured quilter, Lyn ALchin and all the other preparations that go into such an event.

Lots of shops to visit along the way if you are planning on making a day of it in the Blue Mountains. 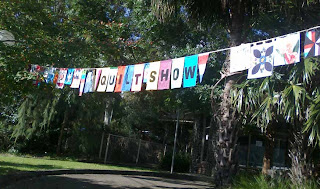 Our quilt show hummed along through Saturday and Sunday, with a steady stream of visitors, some of them lining up at the door for opening time.  Ticket sales indicate we had about 600 people through the doors. After days of rain the weather cleared - a distinct advantage even for an indoor event - people still had to get here.

There will be more professional photos in a little while, but here is a first look at the prizewinners. Prizes were decided by 'viewers' choice: 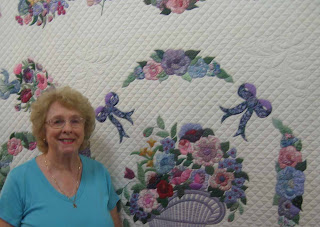 Loraine McIntosh with her winning quilt 'Bridal Baltimore', which was also voted viewers' choice in the applique category 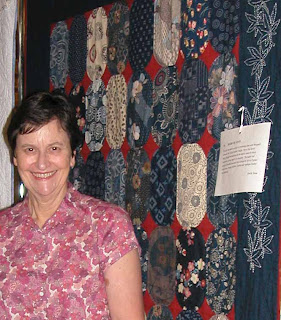 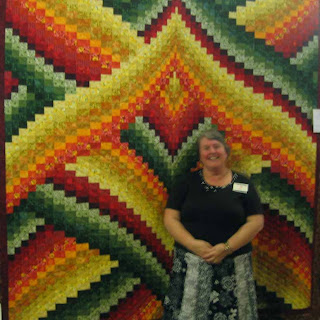 Lynette Harvey won the viewer's choice award for best use of colour. 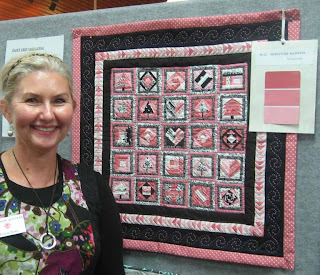 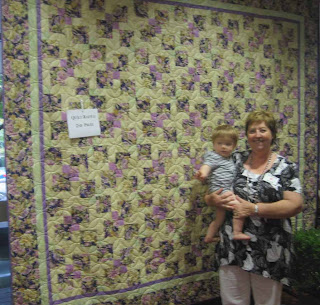 The winner of the first raffle quilt is being notified, while Fairholme member Elaine Bright (with grandson Riley), who was delighted to win the second raffle quilt, could not stop smiling.

Proceeds of the raffle were donated to Hornsby Kuring-gai Association (Action for Mental Health), along with a community quilt to raffle later in the year. 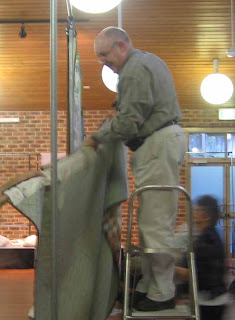 Out thanks and congratulations to Fairholme Convenor and Quilt Show Coordinator Loraine McIntosh and her committee for a very successful event, and our thanks to members and their families, visitors, merchants and sponsors who helped to make it such an enjoyable and popular three days. 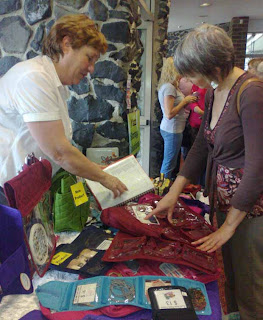 Posted by Blog editor at 7:11 PM No comments: 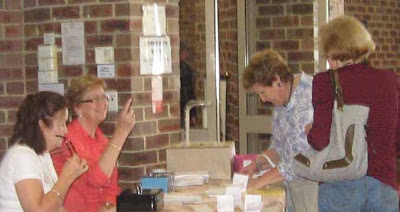 Welcome ... would you like some raffle tickets with that viewer's choice? 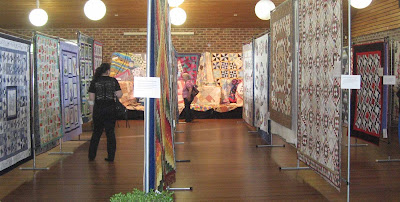 Part of the exhibition floor 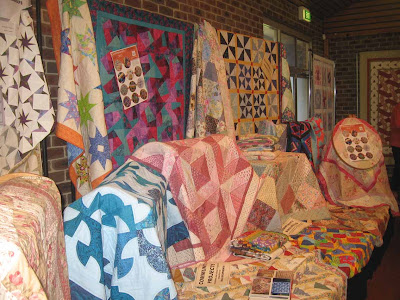 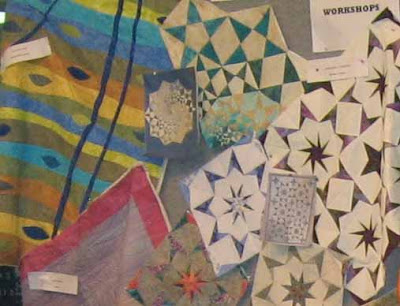 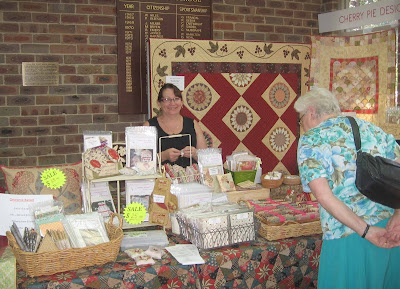 Cherry Pie Designs (the quilt behind Carol is her design 'Sunbursts') 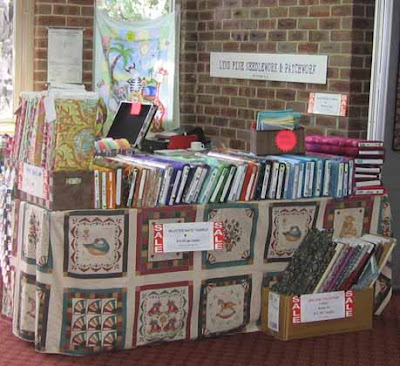 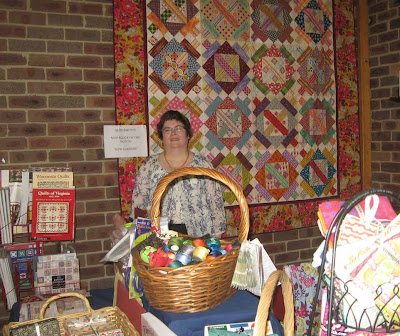 Kay and Andrew Crook are also here with their Yazzii bag range - we'll take a good photo tomorrow, we hope!

We'll be back tomorrow and Sunday!
Posted by Blog editor at 4:56 PM No comments: 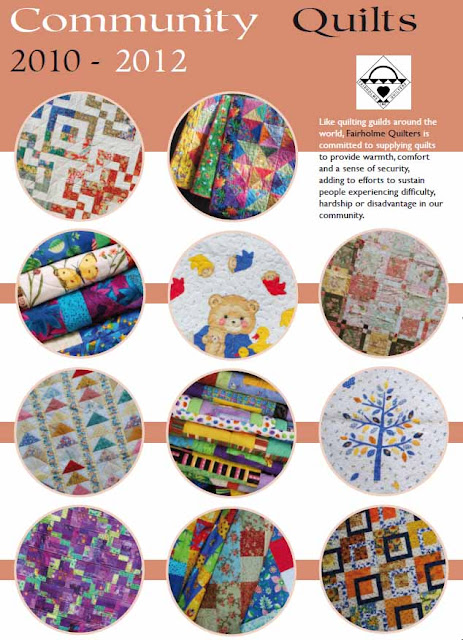 The Fairholme Quilters 2012 Exhibition is hung, ready for opening at 10 am tomorrow morning (Friday 20th).  It looks great, even if we do say so ourselves.

In addition to the main exhibition of members' quilts, you can see a display of quilts we have made to donate to a number of community groups, and our Paint Chip Challenge - paint chips from the local hardware superstore were distributed, with instructions to make a quilt measuring between 24" x 24" and 36 " x 36", using only the three shades of a single colour from the paint chip, adding only black, white and/or cream if desired.  More than 20 members took up the challenge, with excellent results ... but no previews yet!

Merchant stands at the exhibition are:

... and we have a stall stocked with crafts handmade by Fairholme members.  And don't forget our two raffle quilts. 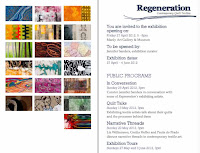 A collaboration between The Quilters' Guild of NSW Inc. and Manly Art Gallery and Museum.

Details of exhibition dates, opening hours and associated events are here, and a preview is here. A number of talks and exhibition tours are scheduled over the exhibtion period.

The Manly Art Gallery and Museum is a lovely exhibition space in a beautiful location on Manly Cove, a short stroll from the ferry wharf - well worth a visit.
Posted by Blog editor at 11:52 AM No comments:

The National Quilt Award 2012 has been awarded to Merelyn Pearce for her quilt Preston Dreaming, which also won Best of Show at the Sydney Quilt Show, 2011.

It is one of a series pf awards presented at the Australasian Quilt Convention Gala Dinner in Melbourne this evening.  From the AQC website:

The National Quilt Award is presented to the maker of the quilt that is judged the best from the Best of Show quilts from the annual state guild shows around the country.
The Rajah Award acknowledges the outstanding contribution by an individual to quilting in Australia.
The Shining Light Award goes to a quilter under 18 years of age and is an encouragement award for junior quilters.
The Lut-Da Award goes to a quilter who has made an outstanding contribution to their local or quilting community via the medium of quilting.

The 2012 Rajah Award was presented to Judy Hooworth.

The 2012 Shining Light award  was presented to Ineka Voight.

Quilts are everywhere ... even in the snow, in France 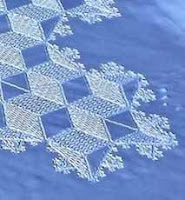 Can you imagine these spectucular designs, made by Simon Beck, in large fields of snow, translated into white wholecloth quilt?  The links are circulating across the internet, often with headings such as "Quilts in snow", and you will see why.

Katie Hosmer's blog post on My Modern Met provides a good collection of the photos, or you can see even more on Simon Beck's own Facebook page (you do not have to be a Facebook account holder to see it).

(Thanks for the link, Noelle!)

The 100 Days of Modern Quilting series is now complete.  An archive of the 100 posts has been posted here, for future reference.

What will the Modern Quilt Guild come up with next?

Posted by Blog editor at 7:05 AM No comments:

... information from a quilt historian about quilt fabric past and present, is now on the blogroll in the right hand column, because it so consistently features interesting posts, not only about the history of American quilts and fabrics (especially around the civil war), and their context in American culture, but also because Barbara Brackman relates her excellent and readable history to contemporary quilting and culture.

Her post of 8th April looks at how differently bindings were applied in the 19th and early 20th centuries and how can be a significant dating clue. Other posts are more about historical context than quilting techniques, and there is a thread of fun running too far beneath the surface.

This recent post looks at quilts featuring reproduction fabrics in the style of English designer William Morris, and includes a link to a Farmer's Wife quilt made in them - this quilt pattern is hugely popular right now.
Posted by Blog editor at 11:20 PM No comments:

Labels: Other blogs, Other quilters

If you are not going to the Australasian Quilt Convention in Melbourne next week, you can see an online preview of one of the the specialist exhibitions on the Into Craft website - the Merelyn Pearce Retrospective that includes the six quilts from her award winning Margaret Preston tribute series.

14th April 2012:
The Bernina Best of Australia Award 2012 has been awarded to Merelyn Pearce for her quilt Preston Dreaming, which also won Best of Show at the Sydney Quilt Show, 2011 (an award also sponsored by Bernina)
Posted by Blog editor at 5:10 PM No comments:

... just a few weeks ago, at Pennant Hills.  Rumour has it that some blocks have progressed to actual quilt tops, so it will be good to see them finished soon! Margaret is an excellent and meticulous teacher, so much was learned, as you can see: 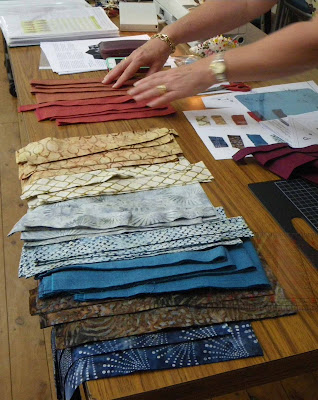 Fabrics are sorted by colour and value ... 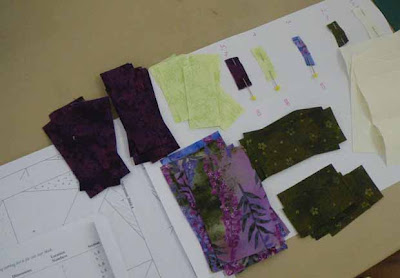 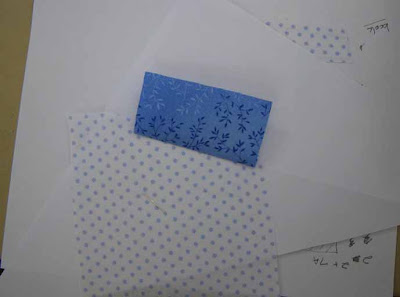 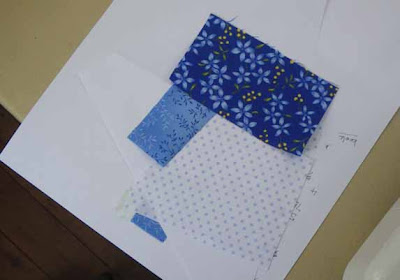 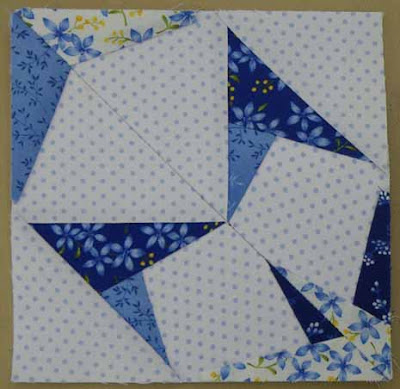 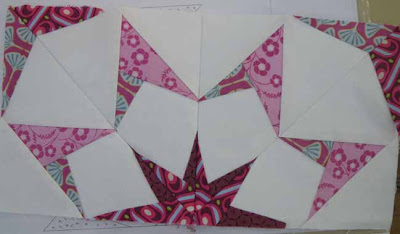 ... the pieces fit together perfectly ... 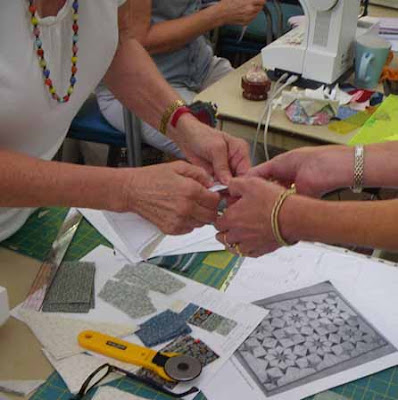 ... a little adjustment and checking here and there ... 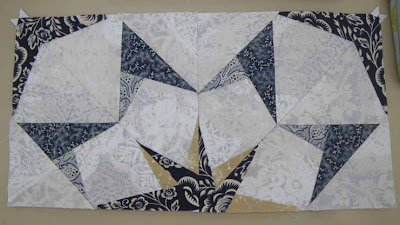 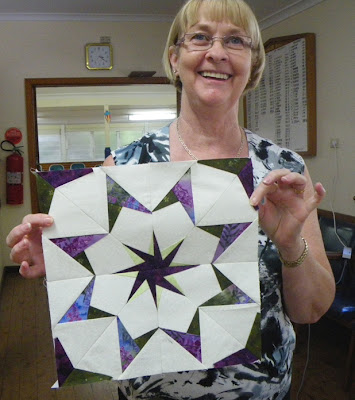 ... and like Louise,  the students are happy with the very sharp points of their completed Mariner's Compass blocks!

Thanks Margaret, and thanks Georgie for organising the workshop.
Posted by Blog editor at 3:31 PM No comments: