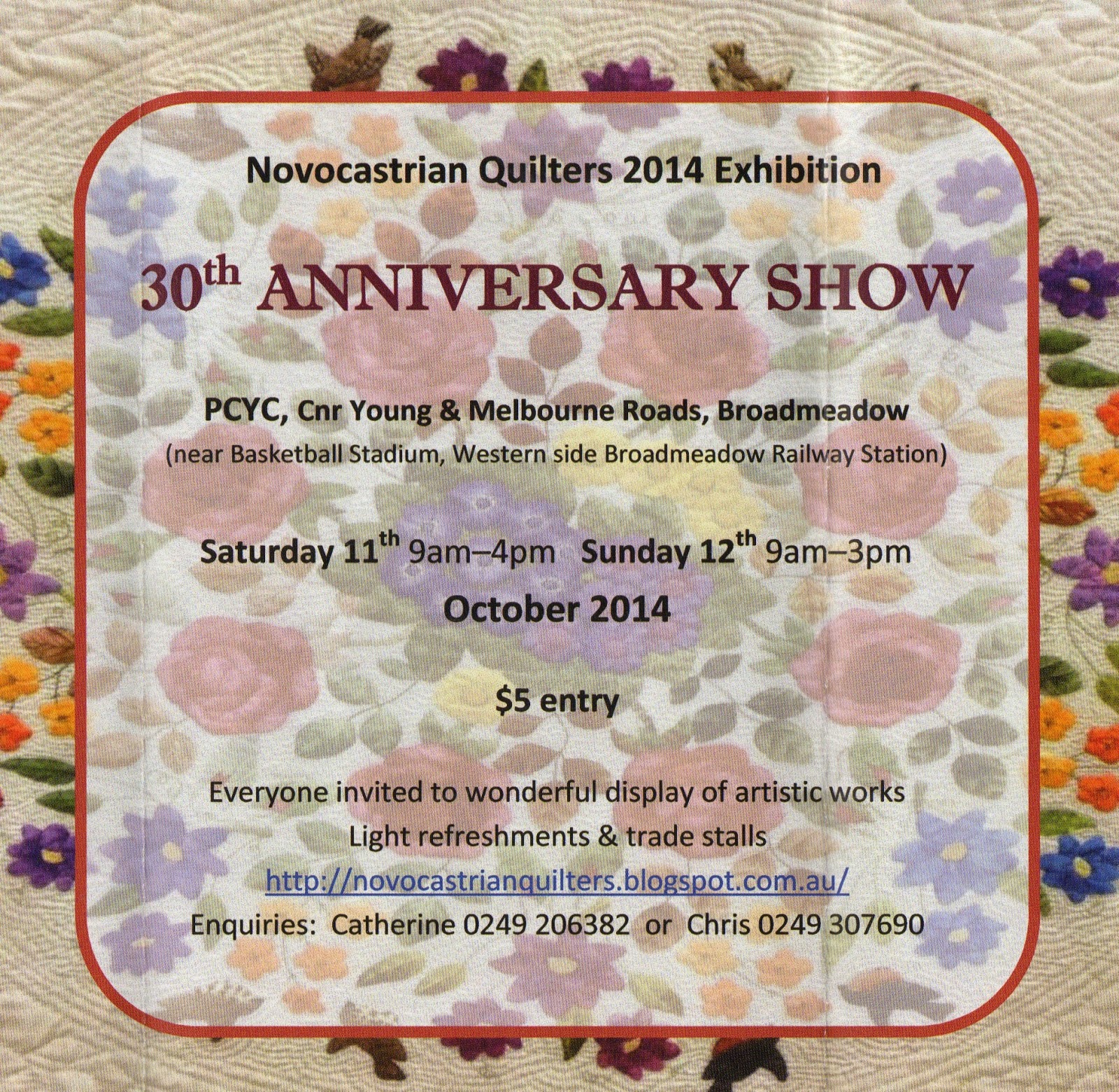 An easy way to sort fabric by value

Wanda Hanson is an American quilter of more than 50 years experience  - she generously shares her experience and prolific quilting output (and her equally prolific stash!) through her popular blog, Exuberant Colour.

In this classic short, well illustrated blog post from 2010, Wanda gives an effective lesson on sorting fabrics by value - light, darks, mediums, then light mediums and dark mediums, till you have them fully scaled.

You will find a lot to like on Wanda's blog, including many beautiful quilts.

Posted by Blog editor at 9:19 PM No comments:

Labels: Fabric, Other blogs, Other quilters

In the hands of Fairholme Quilters this week

Posted by Blog editor at 6:45 PM No comments:

Dare to Differ has given very good, lengthy notice of submission for its 2015 exhibition in South Australia.  Entries are called for from across Australia, with a submission deadline of July 2015:

Further details, an submission and exhibition timeline and entry form can be found here, on Fibre Tribe, the blog of the NSW chapter of the Australian Textile Arts and Surface Design Association.
Posted by Blog editor at 8:00 AM No comments: 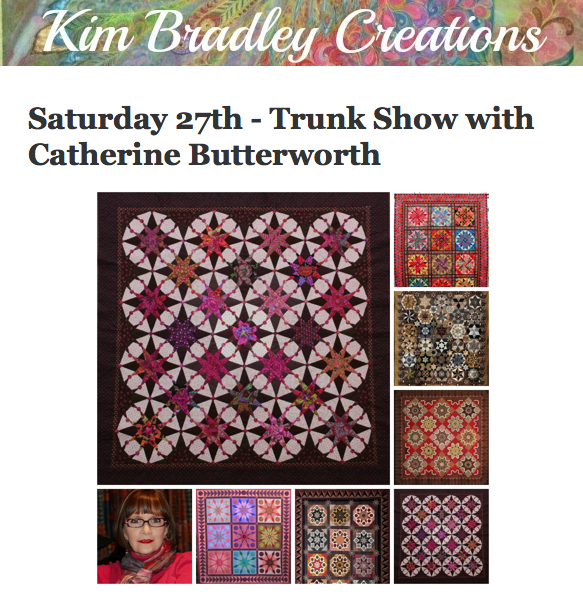 Come and join us in-store for a trunk show with Catherine Butterworth on Saturday 27th September from 10:30am.

In quilt making Catherine is known for her sense of colour, her love of combining prints, her precise machine piecing, her signature fussy cutting and her expertise in the use of From Marti Michell Perfect Patchwork Templates and Rulers.

Catherine’s workshops are technique oriented. Her aim is to provide students with a practical knowledge of the selected topic and then to inspire them with a broad range of design possibilities.

There are also just a couple of places available in Jane Davidson's Nested Churndash workshop on Sunday 28th September, advertised in this newsletter.

(Read this issue of the newsletter online here, or subscribe to receive your own copy by email)


Visit Template Free, the Quilters' Guild of NSW blog for details of this workshop in November:

Posted by Blog editor at 5:22 PM No comments:

If you enjoyed reading Eldrid Røyset Førde's first three posts about Quilt Festival 2014 in Birmingham (and it seems a lot of you did!), then you won't want to miss the latest one - there is nothing remotely like a bed quilt or wall hanging in this one, but it is a visual feast.  You might want to reach through your screen and touch these Quilt Creations - which would NOT have been allowed at Quilt Festival, as you know!
Posted by Blog editor at 3:28 PM No comments: 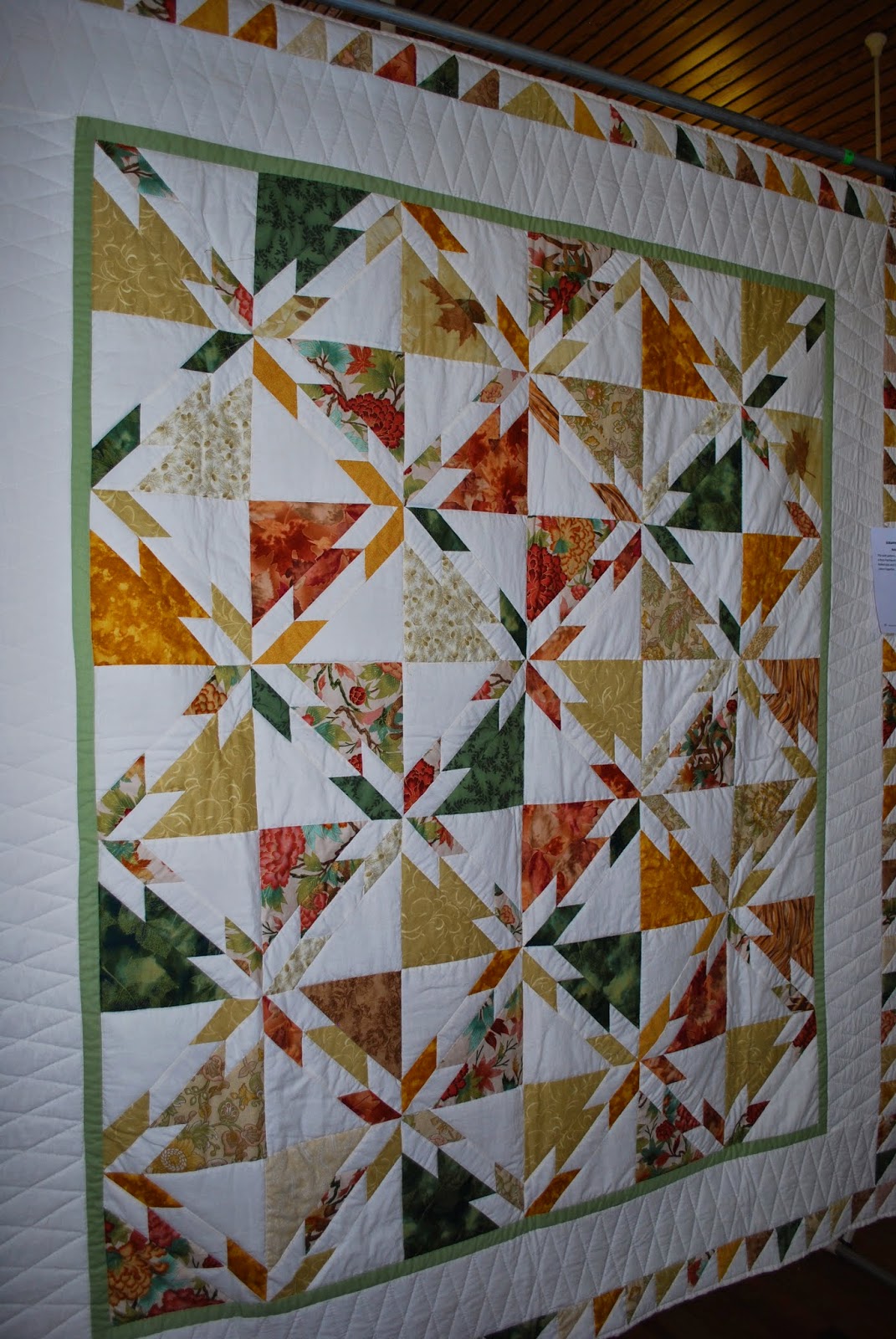 Posted by Blog editor at 9:43 PM No comments: 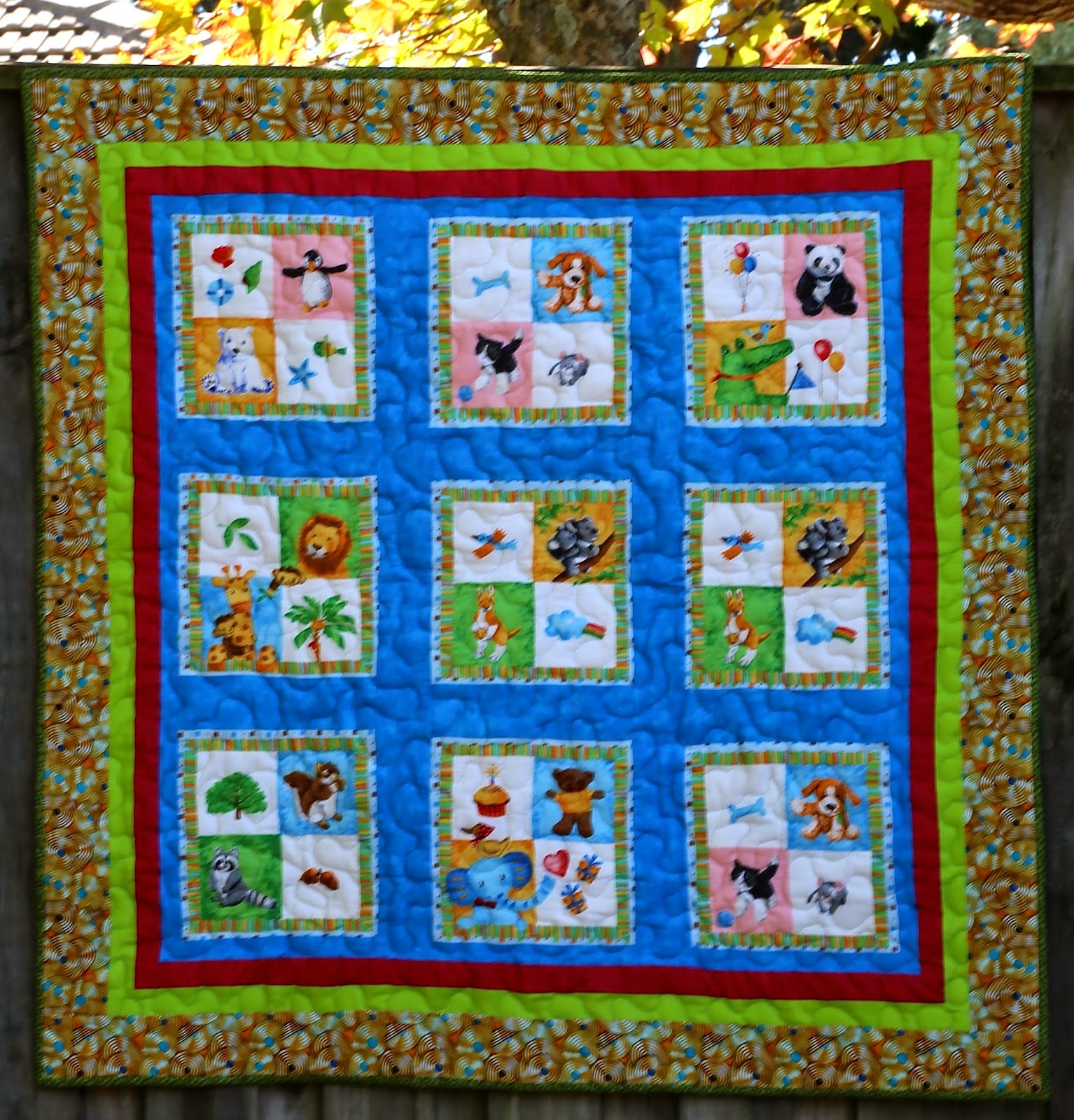 Posted by Blog editor at 1:26 PM No comments:

Norwegian quilter and blogger, Eldrid Røyset Førde, has posted three four five entries about her visit to the 2014 Festival of Quilts in Birmingham (UK) on her blog, Kameleon (quilts, textiles, inspiration). Lots of photos and commentary.
added 18/9/2014:
added 27/12/2014

Posted by Blog editor at 4:46 PM No comments:

Labels: Exhibition, Other blogs, Other quilters

This week at Fairholme

Sydney based quilter, teacher, writer and fabric designer Sarah Fielke has recently released a new book (in collaboration with Amy Lobsiger) and a new fabric range (for Windham Fabics). Both are available in Australia now:

Sarah is one of the tutors on Kim Bradley Creations new class list, and also teaches locally and internationally - you can see more on her teaching schedule here, and she has also recorded a class for Craftsy, Big Techniques from Small Scraps.
Posted by Blog editor at 3:46 PM No comments:

Here in the northern suburbs, we are lucky to have several excellent quilt shops within easy reach - and we like to do our bit by getting round all of them! Most of them hold classes, and they all have sales that quilters need to know about. This week's mail has been from Kim Bradley Creations, at Castle Hill - a new class list up to the end of the year (Kim's classroom is the bees knees), and an anniversary sale:

A pretty special show and tell ...

Last week, Roslyn brought in an absolute treasure for our Monday morning 'show and tell' - a vintage quilt, that she picked up for the proverbial song, at a local market, in 1989.  She saw it hanging over a fence, and thought it was potentially much more interesting and valuable than the seller realised.  So she happily paid the $5 asked, packed it up along with her tired toddler and took it home to examine later.

Roslyn was delighted to find that it was indeed a hand pieced wholecloth quilt from the north of England, made in the 1930s, and valued at a great deal more than she had paid.  It is made from a deep cream cotton, with a ruffle of the same fabric around the edge, as was the fashion of the time.  The intricate medallion design would have been drawn around metal templates, marked with a blue pencil that was washed out after the hand quilting was completed. The batting appears to be cotton, with a few seeds visible on close inspection.  The quilt is quite fragile, almost translucent in parts, indicating that it has had considerable use. 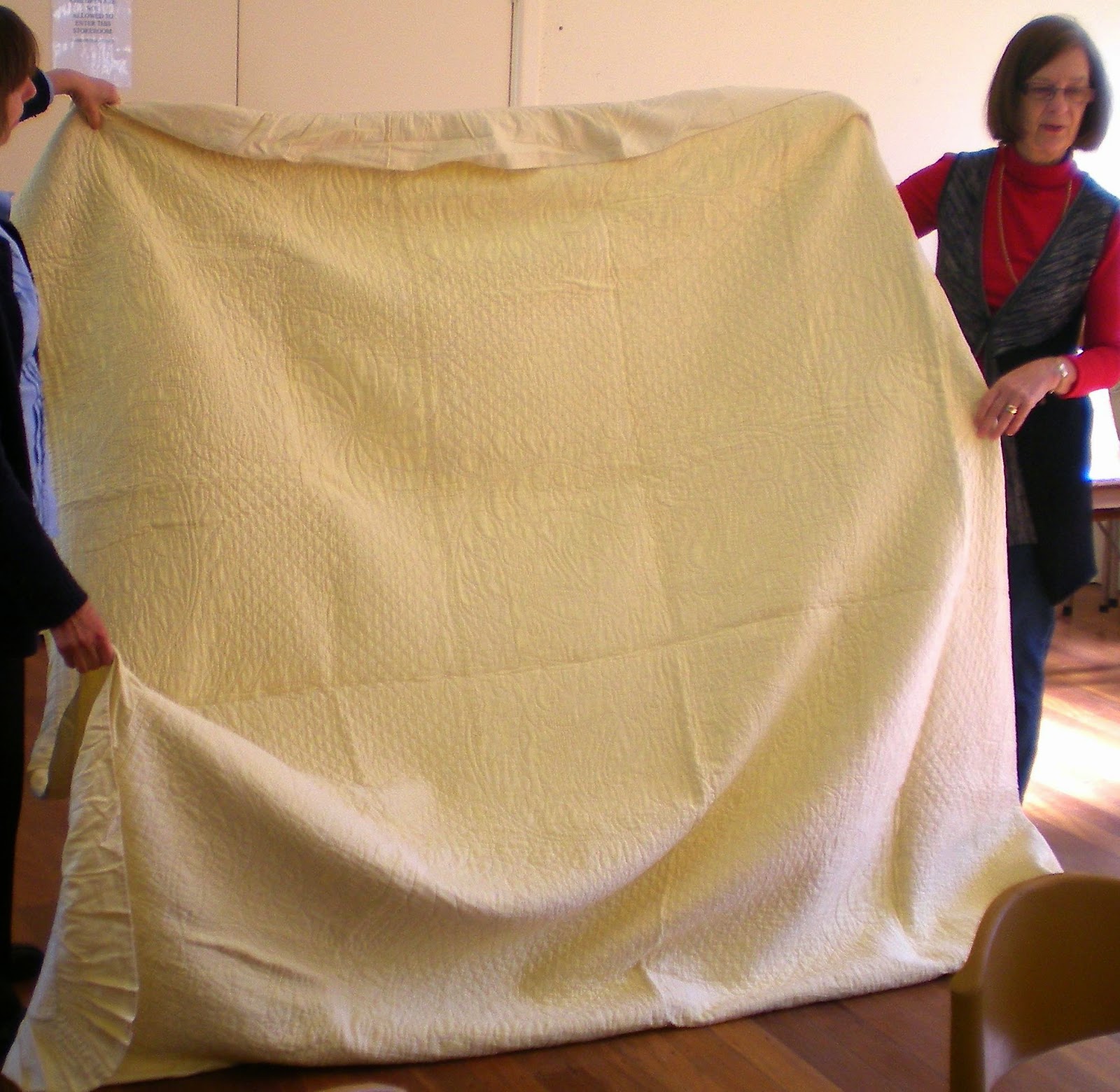 Posted by Blog editor at 7:56 PM No comments: